Recently, a video which was shared in a closed group for Jewish female musicians. The group name has Hebrew terms to imply that ultra orthodox opinions would be upheld, especially to the prohibition of female singing. Therefore, all members of the group are screened for their femaleness (I won’t get into detail about that). 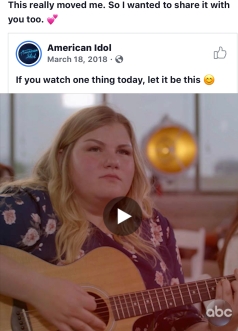 With the sharing of this video, the original-poster promoted actual #inspirationporn. You know the kind: where the “best friend” of the girl about to audition for the TV show competition, was given so much attention for simply showing up. Although the show is heavily influenced by producer’s cuts, it becomes obvious that this girl used his Down Syndrome to gather sympathy votes for her own performance.

This exploitation intentionally shines the light on the disability card, without any regard for his musical aptitude. Actually, they did ask him to sing for a moment, and he did give it his all. What’s missing here is the attitude of the judges, and the promotion of his “great” and “awesome job” without any judging of his musicality in the first place–the objective of this audition. Disabled people aren’t asking for participation trophies, especially not with exaggeration on the basis of their difference. Disabled people are asking for meaningful inclusion in the arts, on the basis of their innate capacity.

Disabled people are asking for meaningful inclusion in the arts, on the basis of their innate capacity.

I commented these sentiments in the group discussion. After several days of trying to build awareness that group members were patronizing this adult by sharing this video, and pointing out that they wouldn’t watch this audition if he wouldn’t have been there… I got an admin notice to “keep it civil”. Actually, no. It was a comment in the thread, publicly, warning that if, I in particular, won’t keep it civil, it will be shut down.

I don’t have the time or spoons to change people’s opinion on social media despite my strong burning desire to be an advocate. I opted to delete my comment, and poof, the entire thread went with it. While I thought this was the end of it, I also got a private message from the head honcho to remind me that there was an overall mission of the group, and that I am being slapped on the wrist.

My response, I think, was appropriate:

“I have the same goals when participating. Not sharing the same opinion about disability attitudes than you, is hardly an indicator of disrespect. In my attempt to clarify someone’s distorted view of disabled people such as myself, I realized that (1) they can’t even hear my thoughts, no matter how eloquent, and (2) the admin is not truly welcoming of all people who wish to connect and build each other up. If the Jewish nation has self hate within, how can we ever build?”

my WHILL power wheelchair fits into a Prius

Phenomenology of the Indigenous Experience: Amazon Kayapo Interview in Brazil with Dr. Henny